Bail is an amount of money that is placed with the Court as insurance for the defendant showing up for his/her criminal trial. The Judge decides the amount of money, and it’s placed into a Court Order.

Bail can be high if the crime is serious or if the Judge thinks a high amount will curtail a possible flight risk. Bail can be zero, too. Sometimes, the Judge will rule that no bail is required, and the defendant will be allowed to leave jail on their own “recognizance.” Most defendants will need to make bail.

Bail is then the cash (or equivalent) that is placed with the Court so the defendant can be freed. This is “posting bail.” When the defendant shows up for trial, then bail is refunded to the person or company that paid the bail.

Smart defendants contact a criminal lawyer as soon as they believe that they may be the subject of investigation by law enforcement. In Louisiana, it’s never too soon to hire a criminal defense attorney; however, it can be too late for a criminal lawyer to help in some situations.

Criminal lawyers representing clients who are under investigation can insure that their legal rights are protected. That any searches of person or property are legally valid. That any questioning by the police is legally appropriate. That no statement is ignorantly given to police that hurts the individual. That any arrest is done properly.

Unlike what is shown on television, things do not always go smoothly or according to state and federal law when someone is stopped, arrested, handcuffed, and taken to the station for booking and afterward, brought before the court for arraignment.

Louisiana law enforcement can, and do, violate state and federal statutes as well as constitutional rights much too often. New Orleans history is filled with criminal defendants who had their rights violated during investigation, arrest, and jail time – long before any trial.

In Louisiana, before the police can arrest someone, “probable cause” must exist before a citizen’s freedom can be taken from them. When someone is arrested and taken to jail they must have certain rights read to them (they must be “Mirandized”). This must be done in the proper manner and at the proper time.

Additionally, just because someone is arrested and jailed does not mean that their legal rights go into limbo. In this country, you are innocent until proven guilty; you have the right not to incriminate yourself; and you maintain a right to privacy at your home, in your car, and workplace unless a Judge grants law enforcement the right to search in a court order.

You also have to be brought before the court and arraigned within a certain time period, where bail will be set for you. The majority of cases will have bail set by the Judge for the defendant, which must be paid if the defendant wants to be released from jail. If you cannot make bail yourself, professional bail bondsman are available to help you (and your family) meet the bail amount.

How To Find Out The Bail Amount

The bail amount is normally determined by these factors:

In some cases a bond may be automatically set. For example, this is not uncommon in DWI cases.

If the bond has not been automatically set, one will be set at the arrested person’s arraignment. The date set for the arraignment will usually be within the next 24 to 48 hours after the arrest.

An attorney can negotiate with the court to get a bail set prior to arraignment, so that you can get your friend or loved one out of jail sooner. Having an attorney on your side in these situations is always a big plus, since you will often find yourself dealing a lot of varying factors and circumstances.

Due to the complexity of these matters, it’s hard to say that there are any hard and fast rules. Each arrest and each case is different. An experienced criminal defense attorney can help navigate and expedite the process. 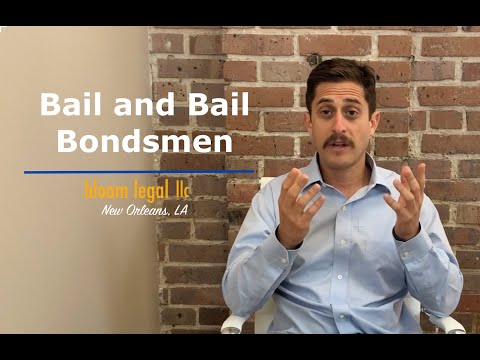 Once you determine what the bail amount is then you have to figure out how to pay it. Effectively a bond is a set amount of money that you pay to get someone released from jail. The bond is a kind of deposit, ensuring that the accused will appear for all future court dates. If they fail to appear, the entire bond may be forfeited.

There are two types of bonds—cash bonds and surety bonds.

Cash bonds are paid direct, and in full to the jail or police department.

In many cases, however, you might not have the money necessary at the drop of a hat to get someone out of jail. That’s where a surety bond comes in. With these types of bond, a bail bondsman acts as a middleman. You pay them a percentage of the bond—usually 13%—and they cover the bond in order to bail your friend or loved one out.

Of course, the bondsman is putting themselves on the line, promising that the accused will show up for court. If they fail to show up, the bondsman then becomes responsible for that money. If you are unable to pay them back, they may send you to collections, or send this guy after you. What is “bail motion” and “bail schedule?”

A bail schedule refers to the standard bail amounts given for certain crimes. Not all crimes have a recommended bail amount, and ultimately the given court where the crime was committed will determine the bail amount.

An attorney may negotiate with the court on behalf of the accused in order to reduce the bail amount. This negotiation is known as a bail motion.

The attorney may argue for a bail reduction by claiming that their client is not a flight risk—meaning they will show up for their court dates— that they are not a threat to society, or that their bail was set unreasonably high.

What are bail bonds companies?

Bail bondsman operate businesses for profit, where they provide a service to the community for a fee. The service they offer is providing bail for someone who has been incarcerated, so that person can be freed. They charge a fee for doing this, which usually equals ten percent (10%) of the total bond amount ordered by the Judge at the arraignment.

Why do companies do this?

Most people who are arrested and jailed want to be freed as soon as possible. But they and their families may not have enough cash money to equal the amount of bail set by the judge. They cannot “post bail” on their own. Bail bonding companies step into this situation, with bail bondsman meeting the need by providing the cash so that bail is posted, and the loved one can be free until – and unless – he or she is convicted of a crime, and sentenced to incarceration.

No. Bail bonding companies are not law firms. Bail bondsman are in the business of providing bail for a set fee. If you fail to appear at court and the company risks losing their money because the bond is at risk, then they will send out bounty hunters to find you. Sometimes these bounty hunters are employees of the bonding company. Sometimes they are independent contractors.

Dog the Bounty Hunter is a famous example of a bounty hunter who works for a Hawaii bonding company, DaKine Bail Bonds. Dog is not a lawyer, and DaKine is not a law office. Dog, his wife Beth, his sons and daughter (along with other bounty hunting family members) deal with bail issues, not with law issues.

When Criminal Defense Attorneys and Bail Bondsman Work Together

Criminal attorneys know whether or not law enforcement has probable cause to arrest their client. They can also make any arrest as painless as possible for the defendant: an attorney can coordinate with a bail bonding company in advance, so that the bondsman can appear with the lawyer before the Court, working with the police so the defendant does not have to go into police custody at all. Criminal lawyers can also advance arguments to the Judge regarding the amount of bail that is appropriate before the court rules.

The Criminal defense lawyer is providing legal representation in this process. Bail bondsman are providing a financial service and that is the extent of their role in the criminal process: they help defendants with money to meet bail so the defendant does not have to sit in jail the entire time between arrest and trial. Their contractual agreement is with their client. It is not with the lawyer. The lawyer and the defendant will have their own, separate legal agreement.

If you have any questions or concerns regarding bail bonds or bail bonding companies, or if you or a loved one has questions about the Louisiana criminal process, please feel free to contact our law offices for a, initial consultation.

I contacted Bloom Legal out of the blue with a strange question for a fiction series I’m writing that takes place in New Orleans. Being from Maryland I was in the dark and needed assistance and they jumped at the chance to help me (they were the only law firm that responded to my e-mail). His team worked quickly and carefully to find the information I needed. Because of the help they provided it changed a large aspect of my novel and for that I am very grateful.
Posted by: Sarah Perrie